Host Unknown, the undisputed leader in information-security based videos made by three random men based out of London is unwavering in supporting the community.

The trio who podcast, act, sing, and dance have delighted and educated the information security scene for the past several years.

Sole Founder Javvad Malik was on the original committee that founded BSides London explained the rationale behind sponsoring the event that takes place on the 8th of June 2016 at the ILEC Conference Centre in London.

“I’m so proud of what BSides has achieved over the last few years. From the humble beginnings in 2011, I’ve seen it grow almost as fast as Andy’s waistline. But simply delivering awesome talks and being a beacon of coolness doesn’t pay the way for conferences and we felt it was time to give back in a more direct way.”

Sole Founder Andrew Agnês elaborated further, “We looked at everything that is important to make a conference happen. Venue, speakers, crew, tickets, catering, after-parties – the works. I made the executive decision to support the conference in the most meaningful way possible – and that was to supply lanyards and badge ribbons. The real measure of how successful a conference is.”

Sole Founded Thom Langford added, “When you have piles of money and Panama is no longer a viable investment option, you can get bored very quickly. Even after my great grandfather contracted Delirium Tremens, he continued to support his community. I’d like to think he’s proud of me continuing his legacy today.” 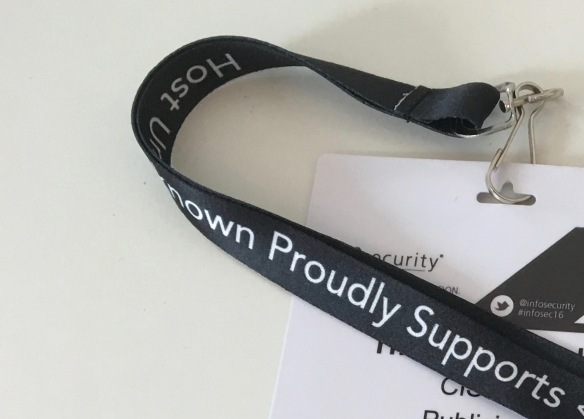 Host Unknown is an information security educational / entertainment group from London, England. It was the pioneer and most significant popularisers of Infosec-Rap and is widely considered one of the seminal groups (based in London) in the history of information security. The group has endured controversy owing to their lyrics which many security managers viewed as being disrespectful of their trade, as well as its glorification of certifications and risk management. The group was subsequently banned from many IRC and sub-Reddit channels. In spite of this, the group has amassed 50,000 YouTube views.

The reason you are struggling to picture this, especially if you attended the RANT Conference, is that this is exactly the opposite of what turned up on the day. Three feckless fools turn up in yesterday’s clothes, unprepared and with a disastrous, incoherent cornucopia of swag and content for their stand. Regularly contradicting each other, sometimes it seems just for fun, our three ‘presenters’ muddled through the day with their shoddily spelt swag, poorly prepared patter and all round pretty poor presentation skills.

Still, nobody seemed to notice.

It was an excellent day all round, and Host Unknown would like to thank Acumin, especially Simon and Donna, for putting their personal reputations as well as that of the RANT Conference itself on the line and graciously allowing Host Unknown to play a part.

We hope you enjoy the film.

We do feel a little bit let down by our so called “internet phenomenon” hosts who took the Host Unknown brand on the road at the 2014 RANT Conference. Even with all of that help and support (and money) we gave them, they still couldn’t get a stand that stood out from the rest.